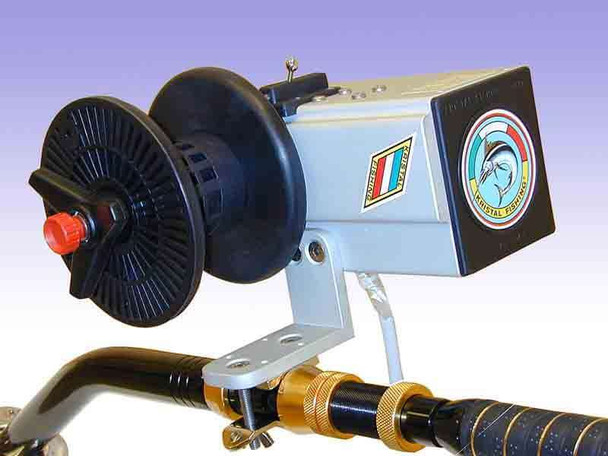 The Kristal XL 75 Gear Driven Electric Deep Drop Fishing Reel and Downrigger with new motor! Pulls 75 LBS of dead weight. Suitable for use as a down rigger, dredge puller, and deep drop electric fishing reel. The XL-75 is a rod mounted, gear driven, electric fishing reel. Equal in power to the 621 XL, the XL-75 features the same motor, in a less expensive package.

We have deep drop rod and reel combos featuring the XL-75. Reasonably priced, this reel is an excellent alternative to more expensive electric deep drop reels. The gear drive, allows this reel to double up as an electric down rigger, as well as a light weight dredge puller (38 LB Max Drag). Anglers who troll deep with down riggers, and deep drop, will appreciate the versatility of the Kristal XL-75 Electric Deep Drop Fishing Reel by Kristal Fishing. Available in both 12 and 24 volt power options.

I discovered this little gem back in 2004. Until that time I had never seen or even heard about the XL 75. One of my customers from Trinidad alerted me to the existence of this reel. I had l ordered one to evaluate the reel. Upon arrival, I was thrilled with the reel and purchased one for myself. Thoroughly impressed with its performance, I immediately commenced marketing the XL 75. I am proud to say that BMC was the first US dealer to sell this reel. The XL 75 has the same motor, same features, and same power specifications as the Kristal 621. Contrary to popular belief, the XL 75 is a rod mounted electric reel. The XL 75 may be mounted on our Sceptre Black Widow Deep Drop Rod with a 130 XXH Seeker Fibeglass Blank.

I have been using the XL 75 since 2004, throughout this time this reel has served me well. In addition. all of my customers who have purchased this reel from me have been extremely satisfied with it's performance. I feel comfortable recommending this reel to all my customers.