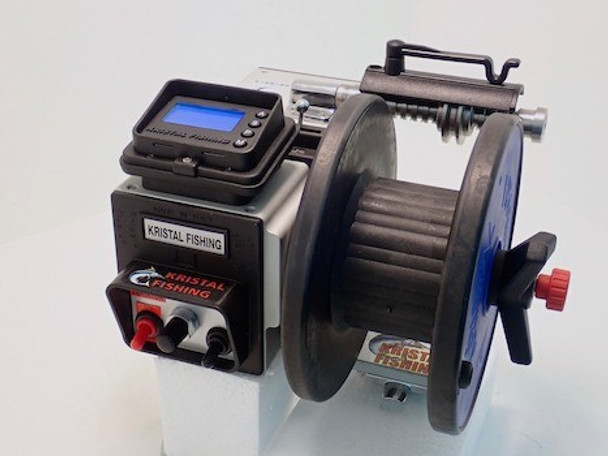 The Kristal XL 75 S Gear Driven Programmable Electric Deep Drop Fishing Reel and Downrigger with new motor! Pulls 75 LBS of dead weight with a max super drag of 120 LBS PLUS. The Super series features variable speed control, and it is fully programmable featuring Auto-Stop, Auto Jigging, and a digital line counter. This reel DOES NOT have a level wind.

We have deep drop rod and reel combos featuring the XL-75 D Super Drag. Reasonably priced, this reel is an excellent alternative to more expensive programmable variable speed electric deep drop reels. The variable speed control, and gear drive allows this reel to double up as an electric downrigger, as well as a dredge puller. Anglers who troll deep with downriggers, and deep drop, will appreciate the versatility of the Kristal XL-75 D Super Drag

I discovered this little gem back in 2004. Until that time I had never seen or even heard about the XL 75. One of my customers from Trinidad alerted me to the existence of this reel. I had this reel special ordered from Kristal in Italy via Kristal USA. Upon arrival, I was thrilled with the reel and purchased one for myself. Thoroughly impressed with it's performance, I immediately commenced marketing the XL 75. I am proud to say that BMC was the first US dealer to sell this reel. This reel has the Super Drag version of the XL 75, boasting a max drag of 120 LB PLUS, you can basically lock it up where there is NO drag. Makes for an excellent programmable dredge puller.

The XL 75 SD has the same motor, same features, and same power specifications as the Kristal 621 DM. Contrary to popular belief, the XL 75 SD is a rod mounted electric reel, with variable speed control and now featuring the ability to program, AutoStop, Auto Jigging, and a digital line counter. The XL 75 SD may be mounted on any of our Sceptre Deep Drop 80-130 rods.

I have been using the XL 75 since 2004, throughout this time this reel has served me well. In addition. all of my customers who have purchased this reel from me have been extremely satisfied with its performance. I feel comfortable recommending this reel to all my customers.

Retrieval Speed: 300 FPM Based on a full Standard Spool